Browse: Home   /   fisadorelli gets four nominations at the 2014 POPAI Awards 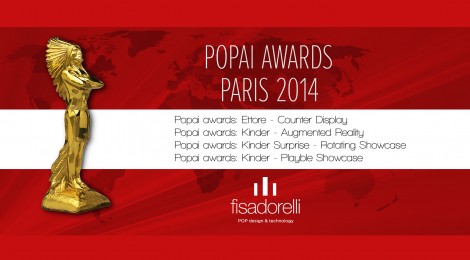 fisadorelli gets four nominations at the 2014 POPAI Awards

fisadorelli gets four nominations at the 2014 POPAI Awards.
The international contest POPAI Awards Paris 2014 was held on 1st April 2014 at the Porte de Versailles in Paris.
This contest is an essential part of the 34th edition of the Salon MPV and is the most important European event of this field during which the best POP products of the year are awarded.
With over 300 competing creations from 12 different countries the event has showcased the know-how of the creation, project and realization of POP products, setting an extremely high quality standard.
After the 2012 and 2013 success, fisadorelli confirms its talent at the Paris POPAI Awards being nominated for each of its four competing creations. This makes the company the most successful Italian competitor.
Such a result fills us with honour and stimulates us to maintain our highest standards considering that the evaluation came from 130 jurors representing the most important and qualified operators.