Browse: Home   /   Gold and silver for fisadorelli at the 2012 Popai Awards 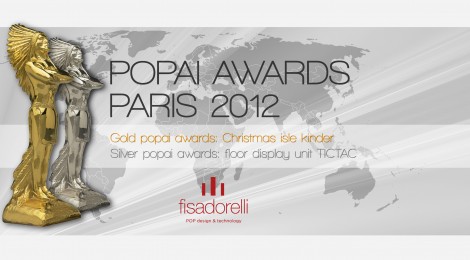 Gold and silver for fisadorelli at the 2012 Popai Awards

The international POPAI Awards Paris 2012  were held on the 27th March at the Porte de Versailles expo in Paris.

With the participation of 324 entries from 14 countries (both inside and outside of Europe)  divided into 45 different categories, the competition lived up to its reputation as a showcase for excellence in the creation, design and production of in-store materials, reflecting an extremely high level of quality.

In this competition we had the honour of being nominated for two of our entries, one in the TEMPORARY FOOD category and the other in the category of COMMERCIAL FIXTURES.

In addition to the satisfaction of been selected by a jury consisting of 150 members, all  experts in the fields of marketing, advertising, sales and merchandising and operators of major international brands and distribution chains, we were also excited to be recognised with the first award at the evening gala event held in Paris on 14 June. We received the GOLD POPAI AWARD for a stand created, developed and produced for the Kinder umbrella brand for Christmas 2011 and the second-place SILVER POPAI AWARD for a floor display unit for the TIC TAC brand.

First of all we would like to dedicate these important international awards to the clients for whom we developed these projects. We are interpreters of goals, idea planners and creators. And it is their means and their desire to innovate and to attract attention to the point of sale in new and original ways that make us express this quality.

These awards are also dedicated to all of the people involved in our projects, from those who put their imagination and creativity into the initial ideas to those who ensure that shipments are delivered on time. A considerable amount of people are involved in the process.

Finally, we also dedicate them to the external partners we collaborate with on a regular basis, which include small and medium-sized businesses and even craftsmen.

The international exposure given to the imagination, creativity and advanced level of industrial design that our territory and its people are capable of expressing, as well as to our long-standing and acknowledged manufacturing skill, was already a huge source of pride for us. But receiving tangible recognition from the most important and qualified European players in the industry gave us even greater satisfaction and drives us to stay focused on this path we have chosen to follow and so strongly believe in.